2 Mondays ago, I took the elevator.
after cycling 130 miles over 15,000 feet that weekend, the 51 steps I normally take to my office can go screw themselves.

last year - while training for the Viva Vegas ride with Team in Training - several of my cycling buddies urged me to do this so-called 'Death Ride' with them in 2013. the name of it was all I had to hear in order to shake my head in a profuse ABSOLUTELY NOT fashion. this was not a task I was interested in tackling.

however, after a horrendous set of Holidays... I decided the Death Ride sounded perfect for me and signed up. 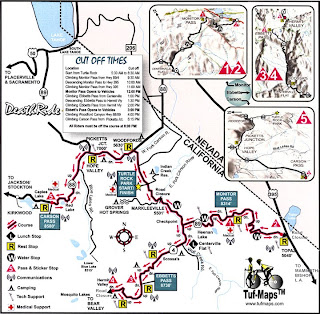 6 months later, a shower head in Carson City wakes me up at 2:30 in the morning. I crawl out of bed, squeeze in to spandex shorts sans underwear, eat some oatmeal, and pray for poop. 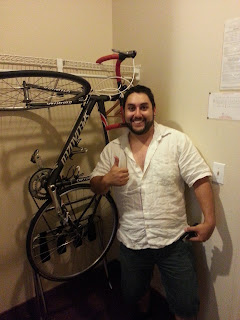 after no one poops, my nervous group of 4 caravans out to Markleeville at 3am. by 4am, we officially begin The Death Ride. (oh and FYI? the stars suck at providing packing light - but are wonderful at providing distraction) 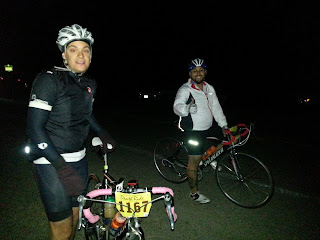 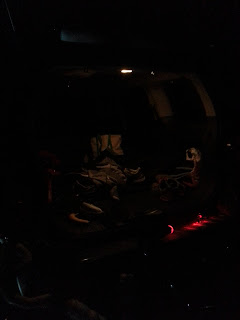 as if cycling in the dark wasn't stupid enough already, it is even dumber when it is in a town where mice run rampant. the only highlight from this whole 'dark' portion of the day was when my buddy Gus dropped his water bottle, and it proceeded to roll down the mountain away from him as he yelled AHHH MY WATER BOTTLE!!!

the sun rose slowly as we climbed Monitor Pass. it was beautiful to watch the orange smack against the mountain tops in the background - this made the climb go by quickly. despite my photo'ing-while-cycling attempts, I could not get a crisp snap of anything... but hey, at least it documented my *blurry pass of Mr. Johnson. 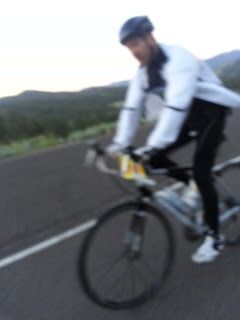 once we hit the top of Monitor we received our 1st pass stickers (you get a different colored one at the completion of every pass), and we all had to pee. this was not a planned stop for us but hydrating for this sort of thing puts your bladder in near-explosion mode constantly. Gus turned in to a coach, filled my water bottles for me and got us to depart quickly for our trek down the backside of Monitor.

Ricky had a smile on his face this ENTIRE downhill. it was amazing, fast, scary, crowded, beautiful and accompanied by scattered ambulances... I dreaded the possibility of seeing an accident = inevitable panic attack. luckily that did not happen.
at the bottom we reconvened, choked down some food, and got our 2nd stickers - except for ME because seriously, who the F gives out stickers for completing a mountain they haven't begun?? 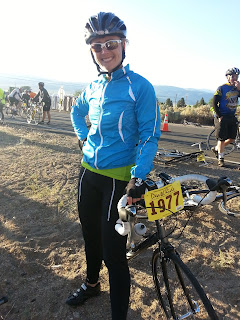 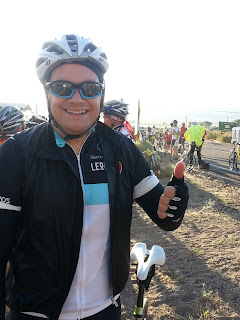 after the long and winding climb back up Monitor Pass we stopped again at the rest stop. 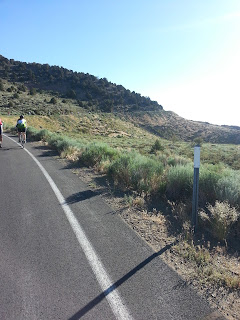 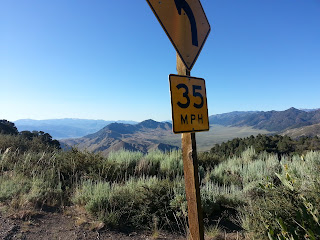 I then proceeded to have a frantic debate about the fact I did not get sticker #2. after impatient tears and loud cursing (by yours truly), I got an authorized signature and the group headed out. (who thought at age 32, I would want a sticker so damn bad?)

on to Ebbetts Pass...
this mountain was the beginning of problems for many riders. it is a 12 mile climb featuring several double-digit % inclines, not to mention... the time of day brought sun and heat. I spoke to as many people as I could to keep my mind off of my thigh which threatened explosion at every switchback. stopping was difficult for everyone due to the steepness - clipping the cleats back in to the pedals on a 12% hill is treacherous.
I played bicycle leap-frog with my buddies on this one... we found ourselves passing each other during the other's break. Mark's thighs were cramping, Rai's knees were bursting, my right leg was tight, Ricky was tired... but Gus was GONE! I suspect his PopTarts had steroids.

once I reached the top, a volunteer immediately offered to rack my bike for me so I could refuel and catch my breath. Rai joined me. this stop was bustling with people and it was easy to lose sight of each other. we were standing at an elevation of 8,730 feet and were advised to not stay at this stop for very long as altitude sickness may set in. 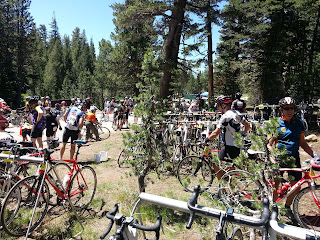 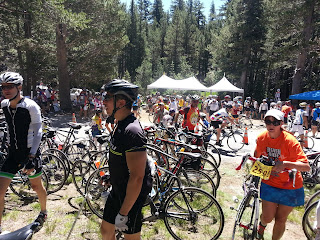 after refilling waters, we headed down the other side of Ebbets... a dauntingly STEEP descent where I observed the people climbing back up to see how difficult this was going to feel soon - many of whom were stopped, sitting, or hovering forward in throw-up position.
bring it.

at the bottom was another rest stop where my friend Mark realized he should not proceed. his legs were doing terrible things and one absolutely positively needs to listen to the body in this situation. Rai and I set off once we were mentally recharged... NEXT! 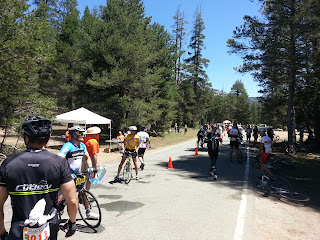 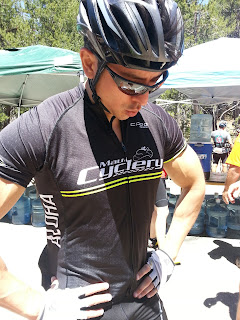 2nd climb up Ebbetts...
grueling... for most. but THIS, was my game changer. I felt amazing. passing a lot of people on this climb gave me a huge boost of confidence but I did NOT forget how good it feels to be encouraged. so I spent time talking to people, getting minds off of the task at hand, asking about jerseys, ensuring everyone felt ok, telling them they are doing GREAT. 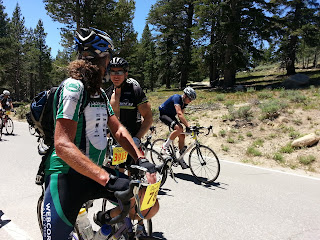 our next downhill was LONG... and awesome-balls. 75% of the way down though, my entire right shifter came loose rendering my gears and rear brake useless. thankfully I was able to coast the rest of the way to the next stop where a full mechanic service was ready to fix it. whew! 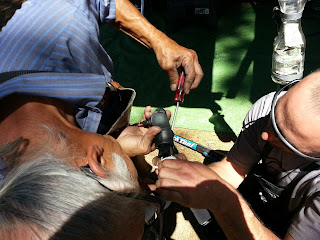 now the time crunch was on. we had to hit the next stop by 4pm in order to qualify to complete all 5 passes. we had 1hr 30min to get through a distance that should take us 1hr. after throwing down some crappy sandwiches and assuring my shifter now worked, we set out.

the roads were no longer closed from cars and did not have a bike lane - hence, almost shitting my shorts several times. I let Rai draft behind me for a longer period of time since his knees were hurting... there would not be much celebration in completing 5 passes if I did it alone.

Woodfords rest stop...
luckily, I made the 4pm cutoff by 30 min but was concerned when I did not see Rai. 15 minutes passed before I decided to continue. because he was in pain, I worried and felt terrible moving ahead. hopefully he was safe and okay.
this stop was by far the best - volunteers held bikes, applied sunscreen for you, showered you with hoses, fed you frozen watermelon... the group was energetic, supportive, and playing loud music. Ricky found me here and we continued together. it would be another 5 miles to the next stop, then 9 to the top of the 5th - and last - mountain.

Carson Pass...
the scenery is BEAUTIFUL here... we pulled over frequently to give Ricky's butt a rest. upon arriving at the next stop I was greeted with a YOU LOOK GREAT MISS! WOULD YOU LIKE SOME ICE COLD WATER? *cue hysterical laugh. I am a walking salt lick.
9 more miles to go... 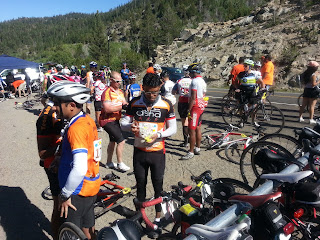 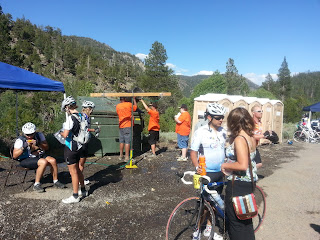 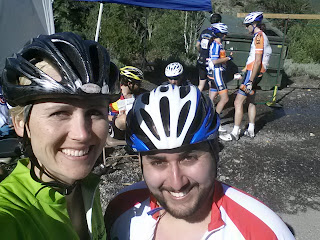 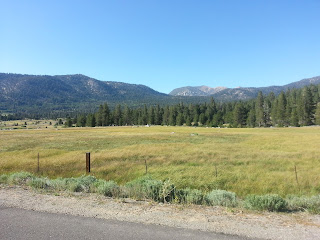 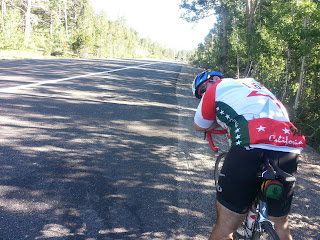 turning through a twisting hill, I pulled over to wait for Ricky and who do I see?? Mr. Johnson. thank GOODness! since he did not rest at either of the previous stops - he passed us while we were getting water. his tube popped earlier which caused us to separate but now here he was and I feel incredibly happy - and proud - to see him! since he is out of water, I give him mine and we crawled forward as a new group of 3. 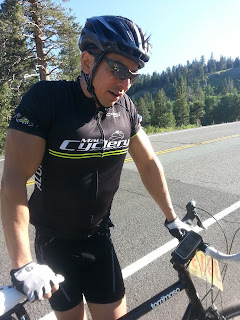 when I realized we had a few miles left and - for some reason - felt good, I pushed forward. after turning a corner, the remaining climb is displayed across the side of the mountain. OH SHIT fell out of my face. correct my form, sip my water, ONE MORE.
passing people on a final climb feels AMAZING. when I arrived at the top, it did not feel real. volunteers smiled at me, gave me the final sticker, a special 5-pass finisher pin, and directed me toward the ice cream sandwiches. several people gave me 1:1 speeches of how big a feat this is and to be proud of myself for doing it - hearing that meant so much to me.

Rai crossed the top... then Ricky, who very swiftly threw his bike in the bushes upon completion. 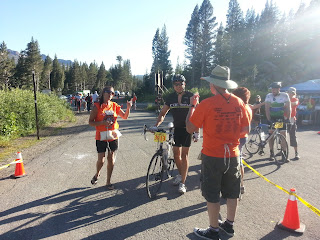 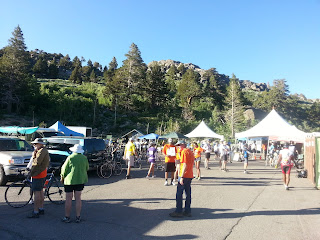 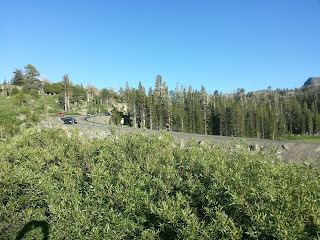 we signed the 5-pass finisher poster, hugged, drank Pepsi, ate ice cream, and groaned when we realized there were 20 downhill miles left until we reached our cars. 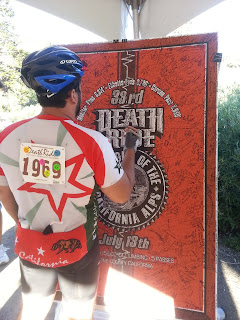 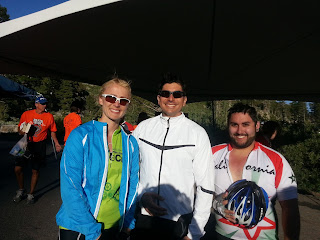 in other news...
...by far, the Death Ride provided me with the most penis and butt sightings I have ever seen. can't say I am very happy about that.
...apparently I talk about my vageen so much, friends are buying me special chamois cream. win!
...my first BIG event that is not fundraising for something. and while I am proud of myself for completing this once *impossible ride, I could be prouder.
...the next day I drove up Carson Pass and snapped a better photo of our last mountain. 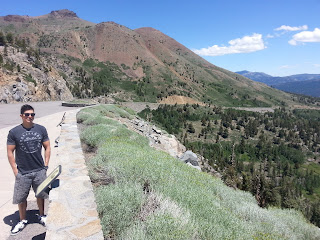