because you ASKED for a poorly-written novel - that's why.

it is one thing to dread the early wake up call for that one day next weekend for that obligation you signed yourself up for. it is a whole other story to have it be the night before, when you set your alarm for 4:00am and your phone confirms: ALARM IS SET FOR 3 HOURS AND 51 MINUTES FROM NOW.

well anyway - after sleep-dressing myself at 4:15am, ensuring all of my bike gear was in my car, and then double-checking I actually had pants on, my friend Rai and I took off for the ride.
upon arrival I sorted out the storing locations for all of my food - my nutrition for the day consisted of a lot of gu's, gummies, and caffeine... and I wonder why I feel terrible for days afterward...

the beginning was a flash - excitement was contagious and everyone rode at a high cadence that they would regret later (me included) but, we did it anyway. Lockheed was on the road in full force - showing off cool jerseys and a boisterous individual (named John) whose normal volume was SHOUTING LEVEL... which was REALLY GOOD!!!!!!!!!!

I was bummed to discover that my usual 1st rest stop was not yet set up - it would only be for the shorter routes which had a later start time. but I stopped regardless and complained to myself about it. *grumble grumble.

the first major climb followed shortly and included much more quiet grumbling but also a LOT of conversing. cycling up hills like these allows me plenty of time to meet people and enjoy the scenery and experience. one couple was keeping a decent pace until the woman let it be known: I THOUGHT YOU SAID THIS WOULD BE SLOW AND STEADY? I advised her partner I THINK SHE WANTS SLOWER AND STEADIER. 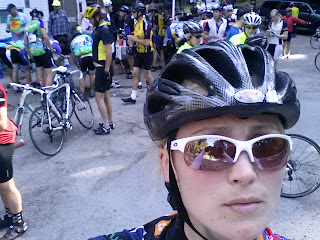 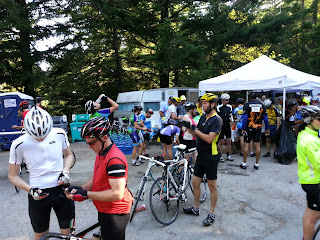 I took some group photos for SHOUTING-John before heading out with Rai.
this part of the ride gave me my all-too-familiar nervous pee sensation. rough road, steep downhill, fast cars, moist air collecting on sunglasses. imagining a crash was enough to keep me cautious.
eventually I passed Rai at a wicked speed. I love it when he chooses his wardrobe unwisely and has to pull over to change (thus allowing me said 'wicked speed' pass).

at the 2nd rest stop I found Rai (yes - he beat me) fiddling with his clothes.
again. 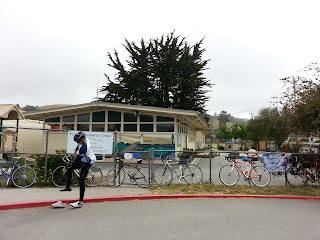 SHOUTING-John as well as a swarm of others arrived after me. we stretched, talked, sat, ate, and painfully hovered over the toilets to pee (if penis-less). 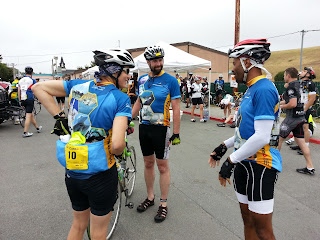 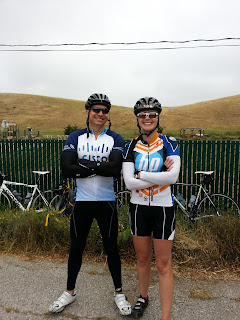 Rai's clothing choice shows we were close to the (cold) ocean. the next climb would take us north-west with views of golden rolling hills, green mountains, happy horses, and the Pacific... including a death-defyingly WINDY 2 miles on Highway 1.

rest stop #3 was crucial. it was the LAST stop before the longest and curviest (and final) climb - the moment I gave myself a Gladiator speech. will what I do in life really echo in eternity? 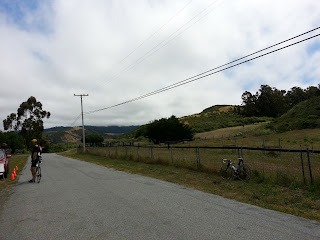 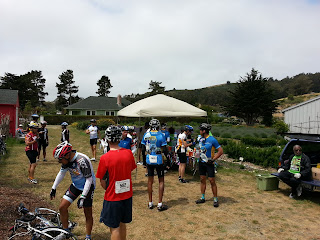 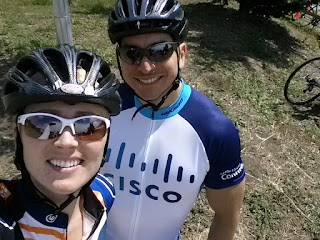 after urging an irresponsible cyclist to clean off the bloody road rash from his unsuccessful date with the pavement, we departed. he would survive.

Tunitas Creek Rd. was a monster. luckily I had lots of company! but unluckily... the first guy I talked to did not speak English, got nervous, and took off ahead of me. ok. : / I passed him soon after as he stopped on the side of the road and practically threw up. weird European. reminded me of my dog when a cat tries to play with him.

miles and switchbacks later I ran out of hill. I found everyone in stretching and pain-writhing positions at the top. the rest of the route was either downhill or flat - bring it. 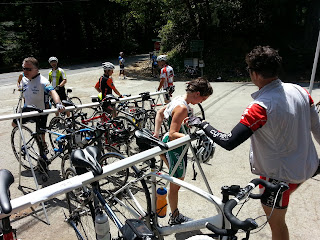 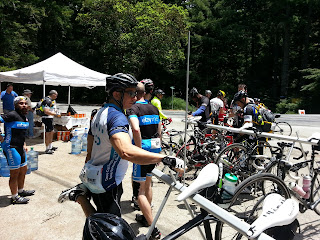 and what is a finish line photo without a question from the dependable Mr. LaForga...
WHAT TOOK YOU SO LONG? 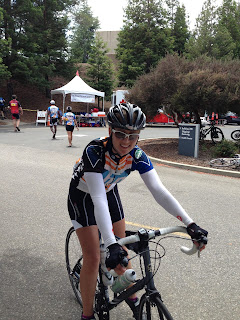 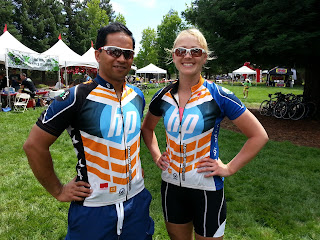 my vageen is falling off.

not possible I am sure but also, possible - I am sure.
all of this bike riding was fine and dandy... before the steep hills every single weekend. nowadays, she is always pissed. luckily, I found this website that tells me nothing I already did not know. but it at least reassured me that my vageen is not the only one falling off one's body. 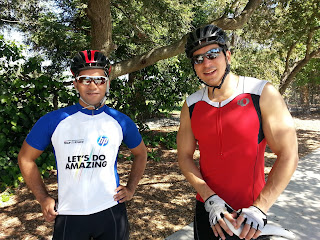 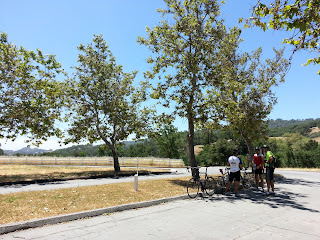 it was turning out to be a miserable-hot day. you know - the kind that amplifies the cicadas? I dislike that sort of hot. 4 people were in my group that day, plus one friend in high-tops on a mountain bike with a kick-stand that started earlier (his bad-assery is both obvious and exponential). but only 3 out of our 5 made it to the top. the heat was a major enemy. mile after mile I passed strangers that had pulled over in to the shade. every time I asked if he/she was okay, I would get an indiscernible YES-nod followed by a "keep on going" hand signal.
not a comfortable way to leave someone.
about 2 miles from the top, I passed a man laying in the shade, back against a tree, nearly stripped of all biking gear in an attempt to cool off his bald salty head. he asked me to tell his friend Craig at the top that he was not going to make it.
that is one way to motivate me to get there I suppose. 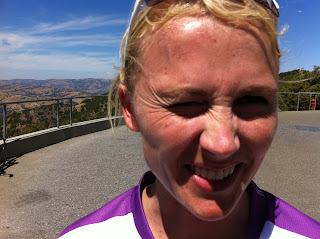 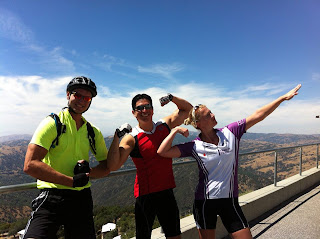 upon arrival, we took our first official tour of the Lick Observatory (yes, I found Craig first). coincidentally, the Observatory was celebrating its 125th year. we learned several interesting factoids like, James Lick's body is buried underneath the Observatory (um...?), Mr. Lick had a very large... beard, the floor takes approximately 2 minutes to raise to the level of the telescope allowing you to see through it, the 'desk' controlling the telescope looks like something out of Star Trek, and the walls are original and not finished. 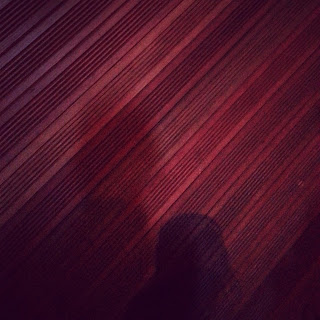 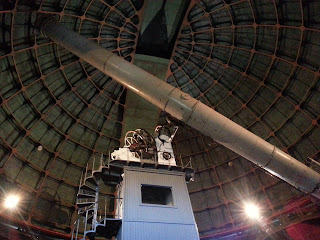 happy anniversary Lick Observatory! thank you for giving me (and thousands of others) an amazing prize every time I reach the top of Mt. Hamilton Rd.