What Happens in Vegas: a very detailed public post

3:06am
I wake up. Strategically placed cell phone alarm was placed too far away for me to snooze it.ok ok! I'm up.I remember the order in which I need to do things and immediately begin by stripping out of my warm cotton pjs and into my Vegas AC`ed spandex shorts and jersey. Brush my teeth, tie my hair, admire my blood-shot eyes, tend to my soon-to-be-salted face and throw down a coffee, banana, and yogurt. After a failed toilet attempt (no surprise there) I strap on my shark finned helmet, tug my 1 pound of nutrition in to my jersey pockets and depart.
3:45am
Half of my team is waiting in our meeting spot already. The rest quickly trickle in and its a speedy tire-pumping frenzy. 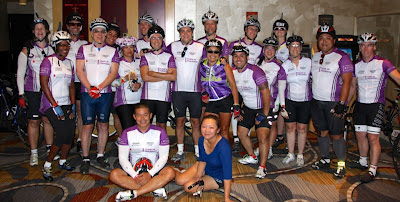 We are decorated with glowing bracelets and blinking red safety lights as we tap-tap cleat walk out in to the hot Vegas leftover night air. 500 of us cycle down the strip like a blinking light freak parade as drunk groupies belt out the last song they heard at the club. No wonder what happens here stays here - there is no way they'll remember this tomorrow.. Er, later. 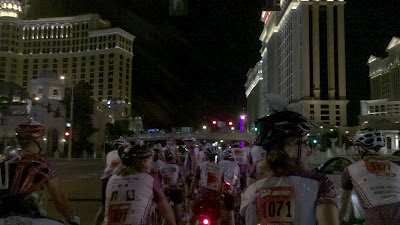 It is a 3.8 mile ride to the starting line - which is more of a starting cluster-mob by 4:30am. My 5 person pace group excuses our way closer to the front and my bike frowns at me as we are surrounded by more carbon.
It is ok bike - you have me.

5:00am
Fireworks explode at the start and I pee a little. The first wave starts and we awkward bike-duck-walk until they stop me AT the starting line - I am officially the first person to cross for the second wave. After an unbearable pause, the gun goes off. 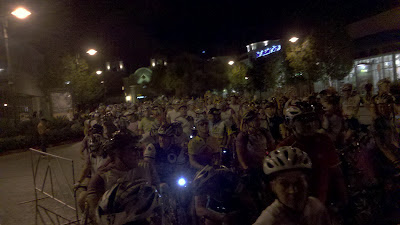 Excited, scared, and needing to poo, I cling to my team through the massive group as we find our happy (though fast) pace - silly adrenaline.

It is dark and dangerous speeding down the strip again. The group is larger now than when we headed toward the start and its difficult to see everyone at 23mph. The road is closed from cars and cyclists are scattered across 4 lanes. Some people forget etiquette and pass on the right or slow down before pulling over. I yell at a girl who comes to a full stop in the center of the road - dummy! Soon enough we pull away from the masses and enjoy the unfamiliar mountainous view. Woohoo it has begun! 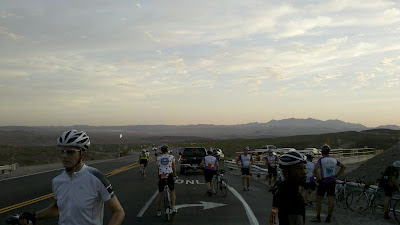 The sun is rising and the view is breathtaking. We stock up on water and get our snack on - a rising sun means rising heat means rising sweat output! Electrolytes and energy maintenance is key. We quickly hit the road again and admire the mountains around us and the warm Vegas city lights floating beside us.

7:41am
I finish a small hill and pull over to wait for my teammates. 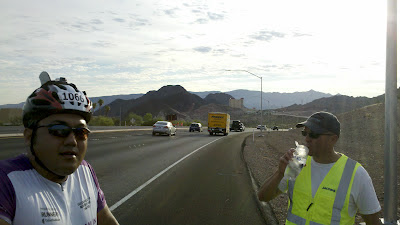 A course volunteer makes small talk and tells me to be cautious through the upcoming sharp turns as people have already fallen - not the ideal pep-talk but I'll take it.
We re-group and charge forward to Hoover Dam.

8:01am
Hoover Dam is amazing! Its hard to stop photo-snapping but we need more water. 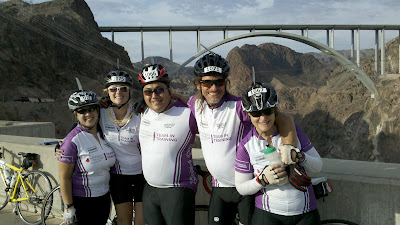 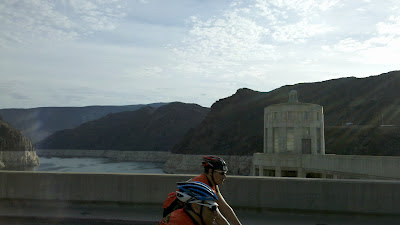 The faster pace group meets up with us and its great to see them at such a memorable place. After refueling we head uphill and out of this high tourist traffic spot. An ambulance rushes by us to tend to a crashed participant. It doesn't look good but they have it under control and wave us past after a brief halt.

The downhill that followed felt wonderful - and I paused at the bottom so we could regroup.. and so I could take a heinous photo of myself.


The next hill is gradual, longer, and grueling and I did not want to start it alone.

9:20am
That was rough. I had started that hill with my group but decided to try and catch another member that had gone ahead. So I moved at my own pace... About 7-8mph uphill for several miles. Many people were walking already and I offered words of encouragement to everyone I passed while being surprised I was moving faster than so many rippled-calves people (I blame the heat). I caught up to my teammate just as we reached the top and I felt great! 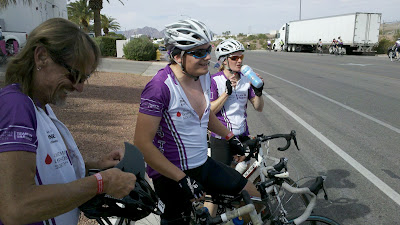 We rested in the shade - he removed his phone from a pocket to find an empty gu packet stuck to it. After peeling the packet off, he licked the front of his phone and I laugh/gagged at the sight. Humor is greatly appreciated. Once we spotted the rest of our group we departed mile 50 with a plan to rest at mile 65 over lunch.

9:58am
Why did the caterpillar cross the bike path? 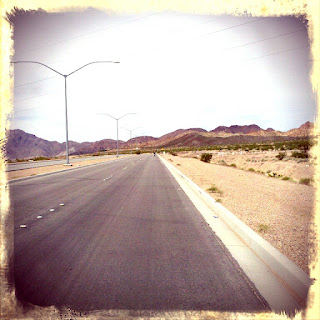 To get a better view of my new gator-skin tires obviously.
These large green wigglies were splattered on the cement like squeezed ketchup packets. Their Moses apparently forgot to split the Bicycle Sea before waving his compadres across.
Wait until you have wings buddies.

10:45am
Lunch sucks. Dry croissant-wiches, plain pasta, wraps, oh and? They're out of water. Luckily, before apocalypse reactions hit, a truck appears with more jugs. Everyone puts their shotguns back. 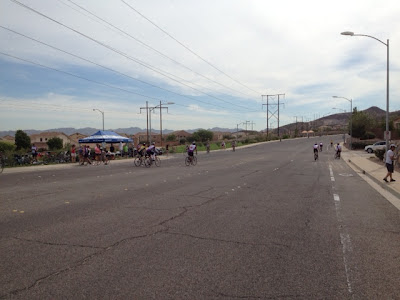 We ate and tended to a teeth-gritting muscle-cramping pained friend. Hugs, massages, and tears later and we were off.

No-idea-whenPM
I am told to go on without my team.
I am sad to leave the 2 people consumed by muscle cramps and heat - no matter how hard you train or how well-prepared you are, you cannot predict the future. They were clearly frustrated and I felt horrible for still wanting to make mile 85 by 2pm. At that time, if you aren't at mile 85 they stop you from continuing the 122 mile route and point you in the 102 mile direction. I had advertised the 122 mile challenge to my supporters and committed to that distance in my head - I wanted it. So a teammate and I were instructed to stick together and make the cut-off.
We headed out and immediately began passing the people that passed us earlier - we were determined. We briefly paused to get more water, and he tells me he doesn't think he can continue. I am shocked. He was cycling so well therefore his self-doubt is a surprise. Upon hearing that, he agrees to go further. We will push forward with a slower but consistent pace. At mile 81 he says he's stopping and insists I continue.
This freaks. Me. Out!
I can't do this alone! Its too hot! I might pass out! I might crash; get a flat; be attacked by a mass caterpillar gang out for revenge; take a wrong turn and get lost. All of my insecurities and fears gather at the front of my brain as he pulls away.
I am not fearless. 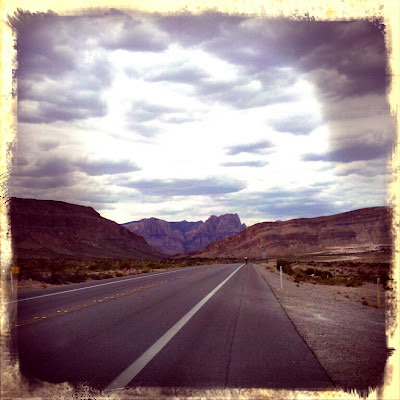 1:35pm
I cross mile 85. I am happy I made the cut-off time but very quickly that happiness transforms in to panic.
2:22pm
I remember the girl I watched at a red light 2 miles ago - she was vomiting from heat stroke on the side of the road. I am without my team, without strangers, in the middle of nowhere-desert - heat stroke is my biggest fear right now. With no one in site, I call Nick to calm my nerves. Maybe complaining aloud will be calming. 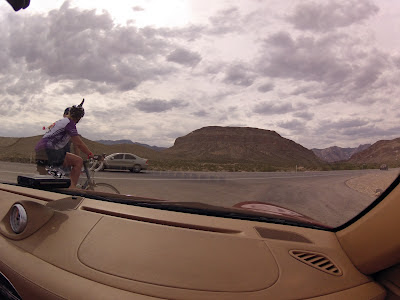 The next turn reveals a Team in Training support van. 2 ladies from New Mexico give me ICE WATER and I'm able to put on much-needed chapstick.
A ways further and Nick is on the side of the road to offer encouragement. I feel much better now.
I check my phone for news on my teammates and they made the cutoff!... I wait for them.

LaterPM
They join me and we continue through Red Rock together. It is stunning here. 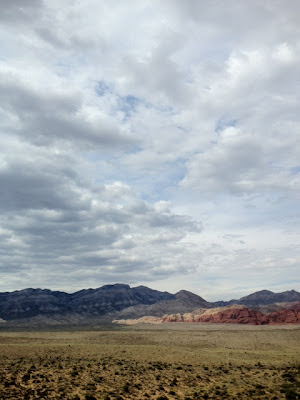 We are surrounded by red layered mountains that remind me of cake (mm cake), Joshua trees everywhere and signs shouting the $500 warning fine for feeding wild horses and burros - which all seemed to have pooped (recently) and then left. We finally begin the 20 mile rolling descent and I do the silly sit-stand-sit-repeat style to relieve my butt pain until the end is in site and we cross the finish line together.

I felt so strong through every mile with the exception of when no other cyclists were visible - which is much better than I expected. My nutrition and electrolyte/heat pills helped keep me afloat - not to mention the support of my teammates, family, friends; present and not. The encouraging words and stories that everyone shared with me throughout my months of training and the sweat and pain I felt throughout my practice rides pushed me forward. 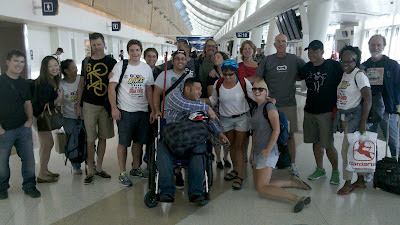 So, thank you.. For giving me fuel for my fire.. For making a simple bike ride stand for so much more.
You just rode for 122 miles in 101 degree Las Vegas heat.

my hardest button to button

for the first time ever, my pants are too tight and I do not care. not one bit.
ok - maybe half of a bit - but not a whole one.

the truth is, all of the miles I have put on my bike over the past few months have put some width on to my legs. making several pairs of pants snugger than usual. it looks like I will be sporting my shorts longer than I normally do until my legs dwindle down to their normal straight-toothpick style again. 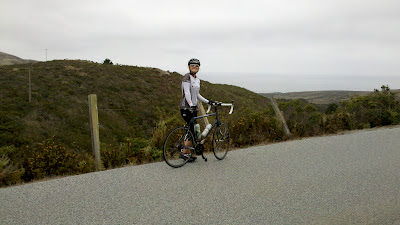 speaking of style, after squeezing in to today's pantalones, I put boots on for the first time since February. at first I was worried it may be too early to sport these things but then remembered: I do not care what anyone thinks, smiled, and continued to tie them. it is nice to be shameless - at least for some things.

in other news...
...a friend of mine recently spelled 'whore', 'hoar'. sigh. at least spell a word like facetious wrong.
...5 more days until I sit on my bike seat for 122 miles. my butt just cramped.
...rushed in to the office today and realized no one else was here. what a waste of perfectly clean work attire.
Posted by Unknown at 3:35 PM 3 comments:

I have decided that a race - of any sort - is my way of dealing with stress. the race itself makes me practically poop in my nice pants.* but the training beforehand is a regimen that allows me to see progress in myself. it helps me feel like I have gotten somewhere - I was at A and now I'm at B. it is the only thing that does this for me.
training - in my head - is my employment.

if only it did not prevent me from enjoying a glass of wine - or four - on a Friday night. stupid Saturday morning bicycle rides. however it does encourage me to consume a whole lot of cookies. 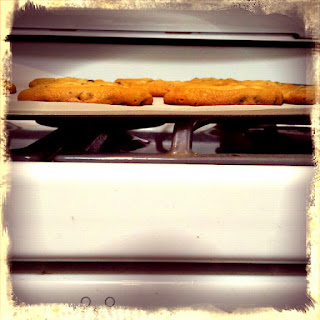 in other news...
...I have renamed burpees, barfees.
...my dad turns old tomorrow. at least this time he is not dragging mom and I to Sizzler.
...hello Autumn. I can barely see you there.
...3 cookies might be enough. I had my hopes up for so much more.

* yes, that is true. and they are Citizens of Humanity.
Posted by Unknown at 5:12 PM No comments: